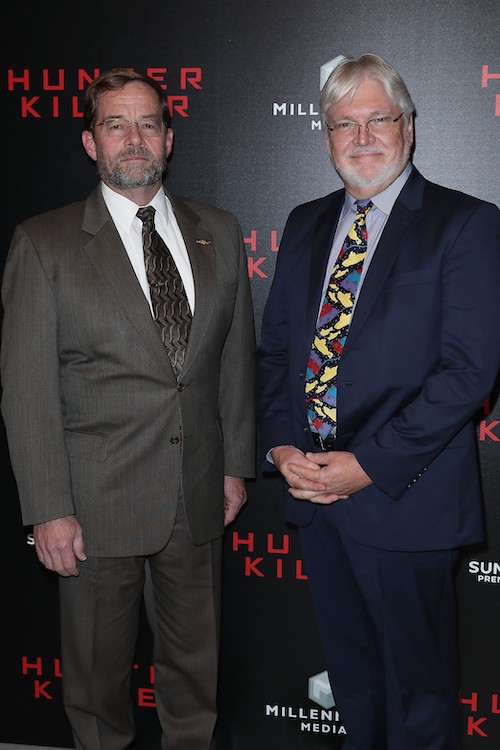 Commander George Wallace USN (ret.) served in the US Navy for twenty-two years as an officer on nuclear submarines. After receiving his commission through Naval ROTC and a degree in Engineering at The Ohio State University, he served on two of Admiral Rickover's famous "Forty One for Freedom", the USS JOHN ADAMS (SSBN 620) and the USS WOODROW WILSON (SSBN 624). He made nine one-hundred-day deterrent patrols during the height of the Cold War.

Commander Wallace served as Executive Officer on the Sturgeon class nuclear attack submarine USS SPADEFISH (SSN 668). Spadefish and all her sister-ships were de-commissioned during the downsizings that occurred in the 1990's. Reflections on the passing of such capable “boats” inspired his first novel Final Bearing, co-authored with Don Keith.

Commander Wallace commanded the Los Angeles class nuclear attack submarine USS HOUSTON (SSN 713) from February 1990 to August 1992. During this tour of duty, he worked extensively with the SEAL community developing SEAL/submarine tactics. Under his command, the Houston was awarded the CIA Meritorious Unit Citation. He completed his active duty career as Assistant Chief of Staff, Submarine Group Five.

Commander Wallace and Don Keith initially teamed up to write the best-selling novel FINAL BEARING. Their next work together was FIRING POINT, which has been adapted to become the major motion picture HUNTER KILLER starring Gerard Butler and Gary Oldman, and then the recently released submarine thriller DANGEROUS GROUNDS. Independently, he is the author of OPERATION GOLDEN DAWN.

Commander Wallace holds an MBA from the University of Phoenix and a degree in International Studies from the Naval War College. In addition to numerous technical papers and articles, he holds two patents from the US Patent and Trademark Office.

An avid woodworker, George has an extensive home workshop and is kept busy producing furniture, turnings, and custom pens for family and friends. He bicycles daily to and from the Washington Navy Yard. Commander Wallace and his wife Penny live in Alexandria, Virginia.

Award-winning and best-selling author Don Keith attended the University of Alabama in Tuscaloosa where he received his degree in broadcast and film communication. While working as a broadcast journalist, he won awards from the Associated Press and United Press International for news writing and reporting. He was also the first winner of Troy University's Hector Award for innovation in broadcast journalism. As an on-the-air broadcaster, Don won the Billboard Magazine "Radio Personality of the Year.” Keith was a broadcast personality for over twenty years and hosted and produced several nationally syndicated radio shows.  His writing has also appeared in such publications as The Washington Post, CQ Magazine, The American Legion Magazine, The K9YA Telegraph, and The Irish Times and he has spoken to scores of groups and participated in hundreds of events around the country. He regularly conducts seminars and writing workshops.

Don’s first novel, THE FOREVER SEASON, was published by St. Martin's Press in the fall of 1995 to commercial and critical success. The novel won the Alabama Library Association's "Fiction of the Year" award in 1997 and has remained continuously in print ever since. It is currently available from the University of Alabama Press as part of its prestigious Deep South Books series.

His second novel, WIZARD OF THE WIND, was based on Keith's years in broadcasting. As was the first book, the second work was published under the imprint of widely praised New York editor Robert Wyatt as A Wyatt Book for St. Martin's Press. Keith next released a series of young adult/men’s' adventure novels co-written with Kent Wright. They are set in stock car racing and titled THE ROLLING THUNDER STOCKCAR RACING SERIES. The works were released in paperback and e-book by Tor Books, as audiobooks by Durkin-Hayes Publishing, and in hardback by Econo-Clad Books.

Keith's first non-fiction work, GALLANT LADY, the true story of a remarkable World War II submarine, the USS Archerfish, was written with the significant help of former Archerfish crewmember Ken Henry.  It was published by Forge Books in June 2004. A trade paperback edition was published in 2005 and an audio version was released by Blackstone Audiobooks. Don's next work of military history, IN THE COURSE OF DUTY, was published by the Caliber imprint of Penguin USA.  The book deals with another amazing WWII submarine, the USS Batfish, her heroic efforts in the Pacific and the wonderful story of how she came to rest today high and dry in a former bean field in Muskogee, Oklahoma--the middle of the Dust Bowl and the Cherokee Nation.

In 2006, Don Keith published FINAL PATROL, another Caliber/Penguin release, which tells the personal, behind-the-scenes stories of each of the 17 WWII submarines that are open to the public around the country as museum ships. Each of the non-fiction submarine books were offered as featured selections of The Military Book Club. Also in 2006, Cumberland House Press released Don's unique series of vignettes about legendary college football coach "Bear" Bryant titled THE BEAR: THE LIFE AND TIMES OF COACH PAUL "BEAR" BRYANT.

Don's next work was THE ICE DIARIES, the untold story of America's first nuclear submarine, USS Nautilus, and her historic Cold War trip to the North Pole in 1958.  The book was co-written with Captain William R. Anderson, the skipper of Nautilus on that world-changing, top-secret voyage and was published by Thomas Nelson. The book was submitted for consideration for the Pulitzer Prize.

The next work was another true story of a series of events aboard the World War II submarine USS Billfish.  WAR BENEATH THE WAVES reveals the previously untold story of how a young officer took charge of a submarine during a vicious depth-charge attack and, with the help of a couple of Chief Petty Officers and brave crewmembers, saved the boat.  It, too, is published by Caliber/Penguin and is also available in an audio-book version. He has also published a collaboration with syndicated radio personalities Rick Burgess and Bill "Bubba" Bussey titled W​​​​E BE BIG as well as a series of inspirational novellas with Edie Hand, titled "The Ride Series."  Another novel, THE SPIN, tells the story of a man who decides to risk all he has on one spin of the roulette wheel in Las Vegas.

In 2011, Don Keith published another historical work, UNDERSEA WARRIOR, about the life and exploits of Commander Dudley "Mush" Morton, World War II's first submarine "ace" and one of its most inspiring and controversial personalities. Don’s latest two biographies include the amazing and inspirational story of a man whose life experiences would make Horatio Alger look like a pessimist.  MATTIE C.'s BOY tells the story of Shelley Stewart, who grew up challenged by poverty, family cruelty, brutal racism and more to become one of the country's top radio broadcasting personalities, a successful businessman, and one of the key players in the human rights movement in Birmingham, Alabama, in the 1960s. The second biography, DREAM ON, is the true story of Steve Skipper, who as a teenager was a brutal enforcer for the Crips gang but overcame that life to become one of our most honored and successful artists.

Don's latest non-fiction works include THE SHIP THAT WOULDN'T DIE, the amazing, true story of a ship mistakenly attacked by the Japanese at the Battle of the Coral Sea and how her crew managed to survive four days adrift at sea, and THE INDESTRUCTIBLE MAN, the inspiring story of World War II hero Captain Dixie Kiefer who led his men through the Coral Sea, Midway, and a brutal kamikaze attack in the China Sea.

get updates and news from wallace and keith!